Our next Book Club will be held on Tuesday, October 6th at 11 a.m. 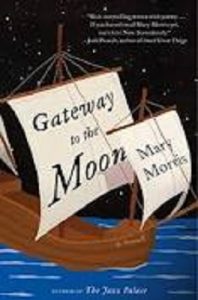 Our next Book Club will be held on Tuesday, October 6th at 11 a.m. Location to be announced. Our new book selection is entitled “Gateway to the Moon”, by Mary Morris.
The AmazonSmile link is:
https://smile.amazon.com/Gateway-Moon-Novel-Mary-Morris/dp/0525434992
In 1492, two history-altering events occurred: the Jews and Muslims of Spain were expelled, and Columbus set sail for the New World. Many Spanish Jews chose not to flee and instead became Christian in name only, maintaining their religious traditions in secret. Among them was Luis de Torres, who accompanied Columbus as an interpreter. Over the centuries, de Torres’ descendants traveled across North America, finally settling in the hills of New Mexico. Now, some five hundred years later, it is in these same hills that Miguel Torres, a young amateur astronomer, finds himself trying to understand the mystery that surrounds him and the town he grew up in: Entrada de la Luna, or Gateway to the Moon.
Poor health and poverty are the norm in Entrada, and luck is rare. So when Miguel sees an ad for a babysitting job in Santa Fe, he jumps at the opportunity. The family for whom he works, the Rothsteins, are Jewish, and Miguel is surprised to find many of their customs similar to those his own family kept but never understood. Braided throughout the present-day narrative are the powerful stories of the ancestors of Entrada’s residents, portraying both the horrors of the Inquisition and the resilience of families. Moving and unforgettable, Gateway to the Moon beautifully weaves the journeys of the converso Jews into the larger American story.