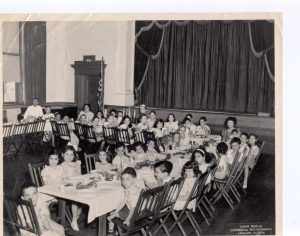 Temple Emanuel’s story began in 1909 with the arrival of Lakeland’s first Jewish settler, Cyrus Wolfson. More Jews came during the Florida boom, and the first formal congregation, called The Jewish Alliance, was formed in 1932 with the purchase of a small building from the Seventh Day Adventist Church on West Patterson Street and South New York Avenue. Myer Cohen donated the first Torah to the Alliance, and soon after, Melvin Estroff celebrated the first Lakeland bar mitzvah.

During the early 1940s, the Jewish Alliance became Temple Emanuel, and in 1943 Rabbi Jack Friedman became its first rabbi. Rabbi Friedman conducted his first bar mitzvah, Gerald Rabin, shortly thereafter. During the war, congregants welcomed many of the soldiers stationed nearby — including Sam Pincus, who met his wife, Eva, when he came to visit an uncle in Lakeland. The end of the war brought more local matches, such as Althea Sofness, who went on a blind date with Joe Miller when she came to visit her sister, Cele Stone.

By 1946, under the leadership of Rabbi Sol Oster, the Temple was holding regular Hebrew classes. The Polk County Chapter of Hadassah was established in 1947. By the end of the 1940s, the synagogue had outgrown its space. When Florida Southern College President Ludd Spivey offered to sell the congregation a large home on Lake Hollingsworth, the synagogue was able to relocate.

Rabbi Alexander Gelberman was the first rabbi to officiate at the new temple. During his tenure, Rabbi Gelberman oversaw many milestones, such as the first confirmation, the first bat mitzvah, and the establishment of a Jewish Cemetery on Highway 98 South.
Rabbi Samuel April became the spiritual leader in 1955 and during his tenure more emphasis was placed on education. Around 1956, a movement began to build a new, larger Temple, designed professionally for that purpose, in front of the old house. Leonard Wolf headed up the building committee, with Harry Slakman and Melvin Estroff in charge of fundraising. There was some community opposition to the new construction and, presumably, to a more prominent Jewish presence. The Temple’s attempts to obtain zoning board approval was stymied. Congregants were considering legal action, but the courage of Minister John L. Newton of the First Presbyterian Church in Lakeland silenced the opponents to our expansion in 1959.

Rabbi Herman Schwartz joined the congregation in 1959, adding Junior Congregation services on Shabbat morning. Rabbi Irwin Cutler came to Lakeland in 1961 and officiated the ground-breaking ceremony for our new Temple building. A fire in April, 1964 destroyed the stately old mansion, which was being used for education classes,. A modern Educational Youth Center was built in its place, as Rabbi Aaron Shapiro took on the leadership of our congregation.

The addition of stained glass windows in the Temple Sanctuary and the Signer Board Room completed the work begun in 1964 by artist Joe Testa-Secca. Rabbi Louis Gorod assumed our pulpit in 1969.

In 1977 Rabbi Mordecai Levy became our spiritual leader and during helped form the Temple Emanuel Men’s Club as another social and fund-raising arm of the congregation. Religious equality for women, including the recognition of women for aliyot and minyanim, the first adult bat mitzvah as well as the first full Shabbat morning bat mitzvah for a girl was celebrated. A few years later, members hired a second religious professional for education and cantorial responsibilities. Mr. Norman Golner served our congregation from 1981 to 1986.

Rabbi Eliezer Ben-Yehuda arrived in August of 1986, bringing many innovations to the temple. He introduced us to the computer age, both in the office and in the Hebrew school; he created a new curriculum for religious school; and took the congregation on its first group tour of Israel. In September of 2001, Rabbi Eddie Fox came to Temple Emanuel, and built many bonds with the greater community—most notably his work with prisoners. Cantor Victor Geigner arrived in 2008, and was able to take over as spiritual leader of the congregation upon the death of Rabbi Fox later that year.

The education building was renovated in 2009, and served many purposes: Saturday morning services, Sunday school, and community center, with activities like movie nights, yoga classes and book club taking place on a weekly basis.

Rabbi Kieffer took the pulpit from 2014 to 2016, bringing people from near and far for musical performances, while his wife, Dianne, created a new position for family programming.

Our current spiritual leader is Rabbi David Goldstein who has helped bring the Temple through hurricanes (Irma in 2017 destroyed part of the ceiling in the sanctuary; a bar mitzvah and high holiday services took place at a church!) and a pandemic. As the world has begun to return to normal, we are grateful for our rich past and our bright future. 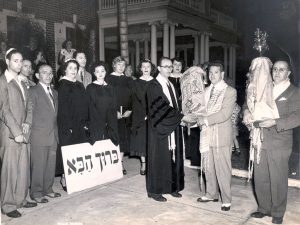 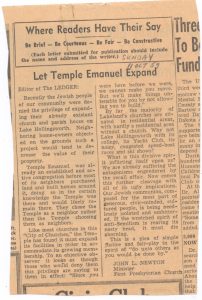 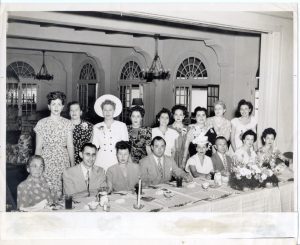 A gift of any kind will help Temple Emanuel provide much-needed support and programs for the Lakeland Jewish community. Learn more about Giving.
DONATE